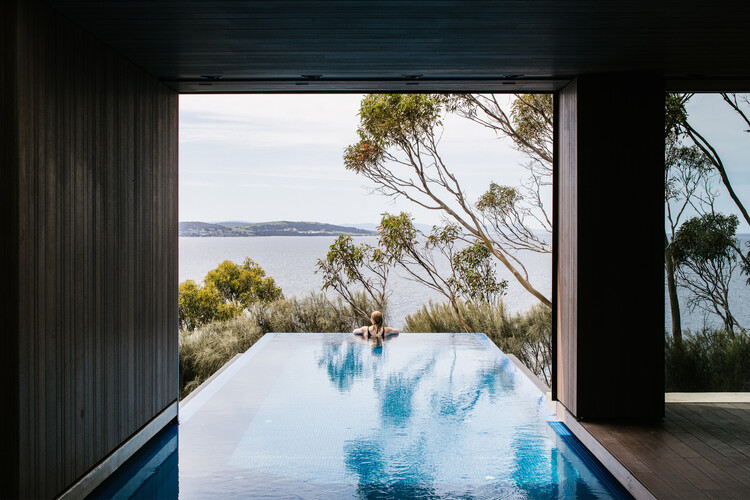 Text description provided by the architects. Tinderbox House is, at its core, a practical, understated family retreat, for a successful and local Tasmanian family. Responding to the many natural and manmade constraints of the site, the highly crafted design is an attempt to add to the ecosystem rather than imposing itself on it. The site is a large semi-rural battle-axe block with challenging bushfire exposure, complex biodiversity overlays and a rugged cliff-side coastline to the East and South. The design progressed through a series of iterations based on our desire for a successful passive solar building.

We had intimate knowledge of site conditions via a partially unbuilt work for the previous owner. He had left us with a gaping wound courtesy of an excavated house site above an infamous underground cellar with a tunnelled access to the rocky foreshore below the site. The cellar provided guidance to the logical location and layout for the new house, but the question was how to orientate the building.

We began with an inwards focused courtyard house with maximum solar exposure and concentrated coastal and rural views. This proved not to meet the client’s expectations of expansive views from every space towards the water (south). We solved this by creating a linear sequence of pavilions segmented visually and physically by a series of mudstone bookend walls. The requested south facing views presented major efficiency challenges, addressed via the mudstone wall elements, the concrete floor and sub-floor providing thermal massing inside the house. We coupled the thermal massing with an internal west facing courtyard and a fully glazed western perimeter. We super-insulated the floor, walls and ceilings, employed a continuous thermal break along the internal perimeter, fully enclosed the subfloor and provided a commercial scale solar/battery storage system together with a geothermal hot water heating and ventilation system.

The mudstone walls were the core material, a selection made collaboratively between client, architect and stonemason. The stone needed to be local and the tones had to reflect the warm tones in the landscape. These tones then informed the other material selections namely warm caramel burnished concrete floors and the ochre toned spotted gum timber cladding which also had to be bushfire resistant.

The clients yearned for a grounded and calming home, a sanctuary from their demanding professional lives. They have stated many times that the house has delivered more than they ever imagined, and once filled with family and the elements of their life, immediately felt like home. The clients love to entertain and are able to do this (loudly) whilst children sleep in the guest wing. The centrepiece cantilevered pool performs both a recreational and visual function appealing to both children and adults. The main bedroom wing includes a winter garden complete with a full height spotted gum screen providing privacy and a magical display of light as the sun passes through the day.

Although the overall scale of the building is large, the main spaces are able to be closed off from each other and thus perform effectively from a thermal perspective, substantially reducing running costs and avoiding wasting natural resources. The floor plan is narrow enough to afford excellent cross-ventilation through all rooms without the requirement for artificial cooling.

Despite the existing building excavation, from the previous owner’s unbuilt development, and the existence of the cellar and tunnel, it was not a smooth approval process to utilise the Eastern area of the site for the new house. This was mainly due to changes in, and additions to State planning rules which led to push back from local Council staff who preferred to locate the building on the hilltop area of the site.

For us it was a no-brainer, the Eastern edge of the property was where the home needed to be, nestled below the ridge of the hill where it was not visible from the water, shielded from prevailing winds, focusing on views through the White Gum habitat of the native protected bird species to water views beyond. This has resulted in a living experience whereby the owners can lie in bed and watch birds nesting in tree tops outside their windows, all whilst listening to sound of waves crashing on the foreshore below.

The client had to have a view to the water from every room, but every room had to have light and warmth. The challenge was the south facing site. The house needed to perform, be functional in that all spaces needed to have the volume to match the ‘large’ living style of the owners, yet it had to provide rich, intimate interior spaces which felt like a home. The house needed to operate as a small home for the couple who lived in it daily, but more importantly it had to be able to accommodate a large and growing family who would visit (and sleep over) often.

This project was very much a collaborative one. The clients wanted to include a small number of nominated subcontractors, namely the stone mason and the smart home contractor, with whom they have previously worked. Integration of these contractors into the main building team was not without its challenges, but very likely resulted in a more successful build. The clients desire to seek out the ‘best’ local in their discipline was realised in this complex commercial scale project. A project manager was crucial and their working relationship with the main building contractor was tantamount to the overall success of the project.

The final agreed design offered efficiency challenges and the resolution of these definitely came at a cost, but this cost was one the clients were willing to pay in order to achieve their views. In particular the stone bookend walls which ground the building to the site, were labour intensive and complicated to construct around the other elements, but they are here to stay. The building is built to last, and built to withstand anything the elements and inhabitants can throw at it. Economy is not by definition building the cheapest way, but about building something that will still be here in 200 years. We are proud to have been able to achieve this in a highly efficient passive solar building.