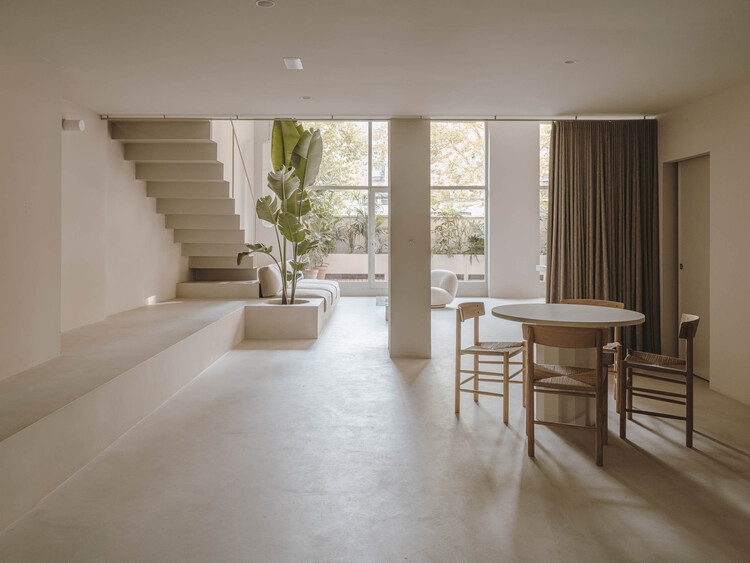 Text description provided by the architects. The project consists of a transformation of a ground floor establishment into a workspace for creative studio Six N. Five. A multifunctional studio, aimed at offering office space and a showroom for exhibits. Adding an area for talks and presentations, an at-home workshop for producing prototypes, a leisure and virtual reality area, and a specialty coffee cafe. In short, a small multidisciplinary space, open to the city with large cultural proposals. The space is located in Barcelona, in the neighborhood of Poblenou. An “L” shaped space, with direct street access and a large back terrace.

The first decision was to clean the premises of all the existing partitions and false ceilings to recover the original concrete structure and thus reveal the true volume of the space. The need for a diverse set of spaces, and the imposing height, allowed us to generate a space in a mezzanine to house the workshop and storage area. This mezzanine also allows us to separate the public area from the more private areas of the studio. The first space; faces the street and is composed of a multipurpose grandstand that extends to the rear of the premises. This area is designed as an exhibition space and also functions as a waiting area for the café. Meanwhile transforming to receive the public who come to see a talk or exhibition given by a guest speaker. The mezzanine can be closed with curtains both at the top and at the bottom, providing an element to divide the different areas allowing for different degrees of privacy.

The private area is composed of the studio, the workshop, the leisure area, and the meeting room including the kitchen. All these spaces are connected to a large terrace, which in addition to giving beautiful views of a wall composed of plants, also allows very special evening sunlight to enter this space. The space was conceived as a large architectural sanctuary where the imprint of craftsmanship is very present. Earth tones are chosen to reinforce this idea of materiality and achieved through the use of micro cement on the floor and the functional elements. The same texture is attained on the walls using the same tone of paint with an irregular plaster base.