ON THE ROAD Store / RIGI Design 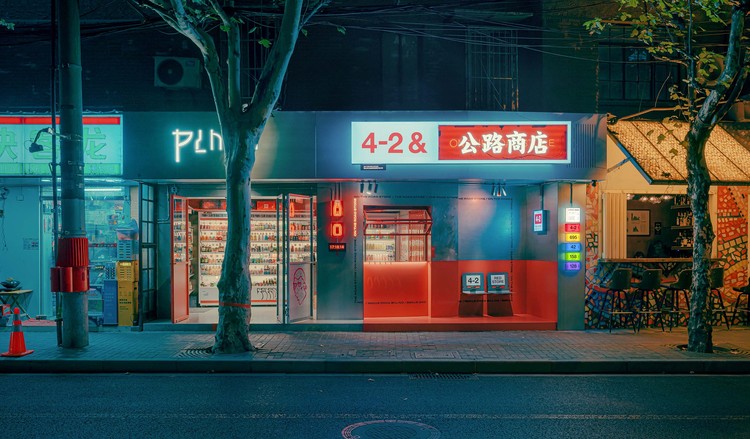 Text description provided by the architects. ON THE ROAD STORE, on one hand, a content creator, or, specifically, a maker of street culture. On the other hand, OTRS uses its official account on WeChat as a means to spread youth culture, which is described as a ‘sub-culture’ by many. Above all these, OTRS also connects the streets of the city through small pubs, creating a niche street culture that exclusively belongs to the young generation. For us RIGI, it is our duty to preserve the public memory of OTRS and the common behavior of the community by creating more logical and extensional designs, which may bring an opportunity to keep the niche and sub-cultural condition of this society.

We value the diversity and freedom in this city, and what we want is to give more possibilities to these characteristics. In every store that is barely twenty square meters, every night after nine o’clock, there could be more unexpected joy and relief in the glasses. The world may have embraced a higher level of efficiency, and may also be creating more anxiety. The city may have seen waves of economic boom, and may also become less interesting. What we are going to do is try to heal the era or city a little bit by making it a band-aid. Five locations, five stores, five streets, here is where we begin the design.

City Band-Aid. This time OTRS has chosen four new locations, which are barely related: Julu Road, North Xiangyang Road, South Maoming Road, South Chengdu Road. Fundamentally, all the stores will be planted in the interface of the city, much like patches in the streets. Of course, we could make appealing excuses to make it sound worth it, but the fact is the designs are doing the same thing, one thing: interruption. Seems like a less valuable job this way, doesn’t it? Thus what we need is — a constructive interruption. We would have to stick a band-aid to make up for the interruption. And of course, as we said there would be five new stores, however, as time went on, the district changed, people moved, and ideas changed. It eventually turned into three stores in the end.

When RIGI gets hands on the design, we intend to form a logic of expression exclusively used by OTRS and wish the logic could connect more spaces throughout the city, no matter it is a barbershop, a toilet, or a pub as it is this time. We are not, from top to bottom, designing a decoration or a design to only be talked about. We use ‘band aid’ to describe OTRS, we are trying to create an interface that links more people. We decide on two things, colors and numbers. There are ways people remember things, for example, through shapes, materials, or even feelings. But color, color is the most direct one since the first element that goes into eyesight is always color.

In popular theories, the color could be used to represent emotions. Red conveys passion, blue means calmness, and the green represents peace. Not necessarily true. Now that we have done an interruptive action, it would be best for us to use the most straightforward and basic way to define every store. Like animals use smells to define each zone, we wish people could recognize different stores by this strong medium. Patch on the streets, divide the zones. Red, green and blue contains immeasurable possibilities. When night comes, the RGB lights spark the three streets and naturally wake dopamine inside young bodies.

There are actions of things, actions by people to things, and actions to people from things. RIGI takes a lot of actions here, we are trying to spark actions with these gears. Maybe you would like to lean on something, sit somewhere, open a bottle, or toss a cap. Stories happen randomly, and that is On The Road Store. So many things might happen through the night, not maybe nothing at all, both of which are reasons people come here.

The poles are always the sexiest installations in the streets, no matter what is on them, illegal flyers or graffiti. It is a billboard for young people, so as we respect the authority of the poles, we also put a functional gear on it, where you could hold a beer on it or just give it a punch. Wish it a more confident pole with this piece of equipment.

A colorful patch simply covers a corner in the city. It is not important to tell if it is a harmonious design because at least we are being honest with the nature of the color. What distinguishes us from the vulgarness and affectations found in many other projects. The crowd in the street. Two seats. Who can sit? How to sit? When to leave? What to do? That’s how it begins. Existence is the meaning. Repeating is power. We want to leave the evidence in the city.

It’s a store of barely twenty square meters, where everything is related to liquors, and every bottle of wine is a story or an attitude. This is a convenient shop about alcohol, that it sells is just liquor, but what you get is far more than that. Every destination should not be the finish point, because the meaning of road is always found in the next stop. Only keeping forward could make your joy today never a painful piece of memory.