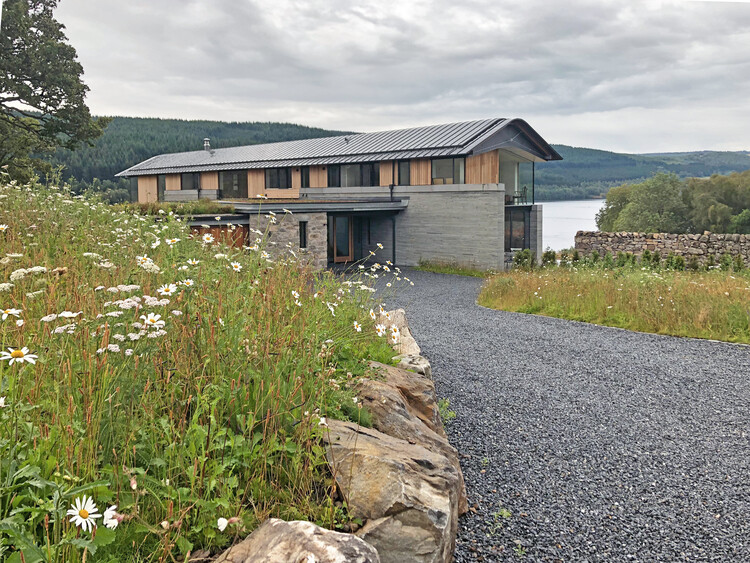 Text description provided by the architects. Loch Tummel house was designed around the experiences of arrival, discovery, shelter and outlook. Our overriding design focus was to create a home that emerges from its setting, as opposed to being an object placed in the landscape. It is nevertheless a self-consciously picturesque house, not trying to be invisible but to have a sense of belonging in its context. We wanted to create a home that offered moments for luxuriating in the sublime grandeur of the surrounding landscape, as well as darker, quieter spaces of refuge and contemplation.

On approach, the house nestles behind a hillside and is only revealed gradually, and long views across the loch to distant hillsides are withheld as one moves through compressed entrance spaces. Framed views open up within the central dining hall, but it is not until you reach the glazed living space at the north end of the house that the full panorama across the loch is revealed. This dramatic reveal references classic country houses and the spatial defensive games of Edwin Lutyens’s castles.

The layout and position of the house responds carefully to the historic pattern of buildings, enclosures, paths and tree lines layered over the site. The house was conceived as an inhabited stone wall contributing to the completion of a historic walled garden, fabled to have been abandoned incomplete by young men called up to fight in the 1745 Jacobite rebellion. Older drystone walls merge with rebuilt ones using salvaged stonework, intersecting with the more refined surfaces of freshly quarried Caithness walls. The house develops a conversational relationship with the adjacent steading, and aspects of its layout hark back directly to the position of the old farmhouse and outbuildings. A former byre was dismantled and the stone reused to create the plinth on which the living room now sits.

The main house has four bedrooms, a broadly open plan series of living spaces, including dining, kitchen, snug and sitting spaces, a study, and utility and storage spaces. The house has internal connections to a garage and boot room. An adjacent set of farm buildings was also renovated as self-contained guest accommodation, with four bedrooms. Separate outbuildings provide space for garaging, gardening stores, workshops and log stores.

The positioning, orientation and massing of the building was carefully considered to hunker the house down into undulating landscape, sheltering it from the severe winds, weather so often batters this part of the Highlands. The long, narrow proportions of the part of the house allow daylight to filter through in multiple directions, meaning the interior is always bright. Apart from a sealed and temperature-controlled wine cellar, the house is naturally ventilated.