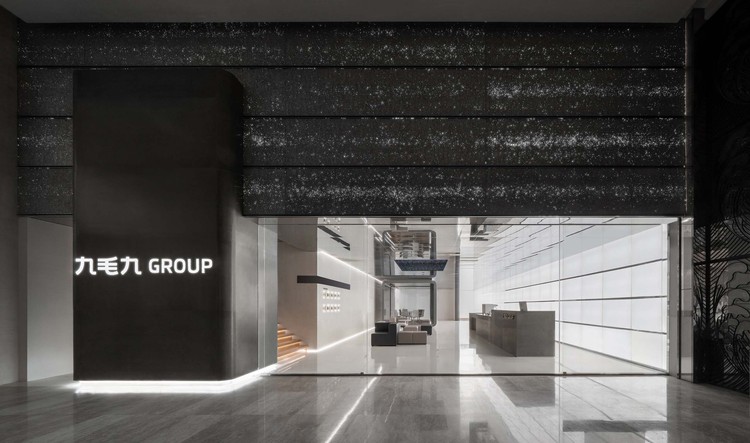 The project is located in the area that used to be a horse racecourse in Tianhe District, Guangzhou. It used to be the main arena for horse racing and witnessed its glorious moments, the same as in Hong Kong. We hope to reflect the strangeness of the established things through simple forms. The lobby entrance was inspired by a spaces atellite, floating in the sky. It is located at the entrance of Jiu Mao Jiu Holdings Limited office space to provide the direction to every “planet”. We used foamed aluminum and stone at the entrance facade. We enlarged the base of the original structural column to an exaggerated scale. The aluminum foam interspersed with the column forms the shape of the satellite and at the same time acts as the barrier to the office on the second floor.

The first thing to do inside the lobby was to to “break” the space between floors. In order to do this we covered the ceiling of the lobby with mirrored stainless steel, making the space look more transparent, filled with an infinite extension of axes that provide a striking visual impression.

A 10 meter long stone block is used in the lobby as a reception desk. The wall behind the desk is covered with acrylic luminous modules, letting the light stand out and be the center of attention rather than just a medium. In this way, the viewer’s perception of space becomes distorted, because the environment seems endless. Mirror stainless steel on the ceiling combined with an acrylic luminous wall visually extends the space and creates the atmosphere of being inside the space station. The wall behind the reception desk is composed of 88 acrylic luminous modules, the lights on each piece can be individually controlled and each module can be disassembled for maintenance.

At the same time, we integrated the concept of the galaxy into the office space, attempting to integrate information technology and art installations in this project, leaving the impression of mysterious, sci-fi space. In the lounge area, we put the planets on the wall as floating balls, just like the Universe in miniature, telling the story of the planets. The mirror ceiling screen shows the corporate culture of Jiu Mao Jiu as well as the concept of the black hole, which fits the galaxy theme concept.

The conference room is embedded in the space as a capsule and combined with multimedia system.E Studio created an experience of transcended technology through the fusion of artistic inspiration with science and technology. Rejecting boring, single brand content display, we attempted to visualize the brand’s characteristics by means of multimedia technology, providing an interesting, interactive experience into unlimited imagination of the brand.

Order and freedom, reason and civilization, the materials, and the ambient light that we used in the hallway path from the lobby to the working area create another spiritual world. Inside the working area, we wanted to distance ourselves from the lobby, adding a more relaxed and intelligent atmosphere. We placed a glass box as the wall partition for the meeting room, which can also be used for writing, set the lights inside the box in order to meet the needs of the working space.

The interior of the office is basically an open space with 100+ slots. We put three cabinets in the space to divide the slots. There are windows in the different zones of each cabinet, that let office workers maintain the comfort of having their own space and at the same time keep the much-needed emotional connection between workers. The entrances of each cabinet are formed in different geometrical shapes that represent different functions, such as display case, deck, bar counter, etc, transforming the workplace into a comfortable living space. We hope to give the space more internal plasticity. After all, there are many more “planets” waiting to be discovered in the galaxy.