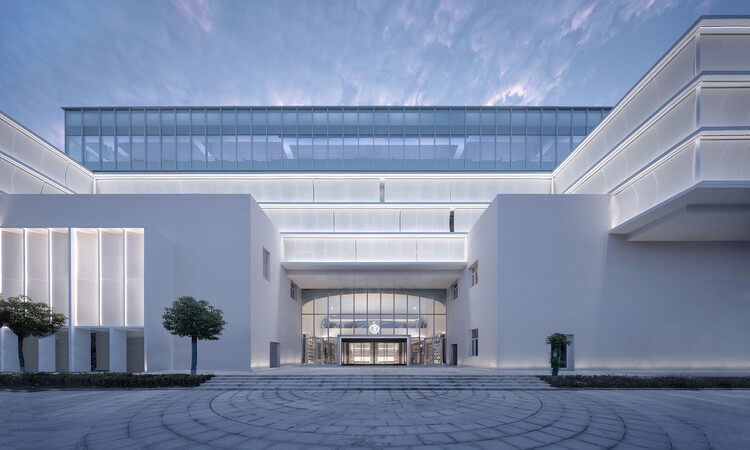 Text description provided by the architects. Multi-purpose has become a “hit-word” in today’s urban planning and construction, so has does the traditional Library. The name “Dongtai” has been used in Chinese history for over 800 years, the city adjacent to the Yellow Sea owns a long history, a deep cultural heritage, and a rising economy, as well as a strong will to build a livable environment that blends cultural and natural aspects together.

The new Dongtai Library is located on the west side of Fan Gong North Road and the south side of Huang Hai Road, sitting on the main urban axis and adjacent to the city core, thus it is one of the key areas within low-development intensity area of the city. The scheme was taken over after the construction of the primary structure, however, the original design had fallen behind the age, either on facilities or the service. Therefore, although the library was rather new in the new town, it had been facing a situation of potential renovation back at the time.

Traditionally, a library is a carrier of historical records and a place of cultural heritage, a building type with a particularly clear functional orientation. However, in response to the development of the times, the Dongtai Municipal Government wanted it to embody the spirit of openness of urban space, providing a wide variety of functional services based on reading, while creating a low-carbon and green quality environment. How can the library be transformed from a serious figure to a new, open, and attractive public space for modern society, and how can it highlight the relationship with the serious government buildings within the context, thus creating a dramatic effect? These are the initial questions we held for the transformation.

The concept of ‘Book Sail’ was used on the concept of the design, signifying that books are the sails of the ship that carries the hope of culture sailing to the future of Dongtai.In addition, another design intention was to break the seriousness of the original closed façade and to enhance the permeability of the overall building façade, as well as to improve the public cognition and public character of the building through a more open façade with the support of both artificial and natural light within the context.

The façade applied a classic format of three sections, using transparent glass curtain wall, perforated pressed aluminium panels as well as curtain wall lined with sunshades respectively from the ground to the fifth level, forming three clean horizontal volumes that are minimal and pure, like books stacked at the heart of the city.

The first floor adopts a modern curtain wall system with a simple form and pure colour palette. On the second and third floors, the curtain wall is constructed using perforated aluminium panels, which cover the original façade of the building while allowing for natural light, while at the same time creating a double-layered façade with a superimposed effect and variation in reality. By controlling the extent of the perforations, a series of jumping arcs are introduced along the street façade, which enriches the visual experience and metaphorically represents the sails of a ship and an open book.

On the fourth and fifth floors are glass curtain wall boxes lined with sunshades. When the building is illuminated at night, the straight white light of the glass curtain wall and the subtle haze of the perforated aluminium panels create a halo over the building. Particularly as the library is situated in the serious and dignified administrative offices, the sharp contrasts have created a dramatic scene in the context. The variation in styles and spans appearing in the same scene enables a surreal dislocation of time and space. In the contrast between the old and the new, the light and the solemn, the two counter parts reflected each other creating a meaning of existence simultaneously, and thus envisioning a rival relationship of co-existence.

The interior continues the concept of the book as a sail, and well-integrated with the original building structure, the design intended to deliver a dynamic and coherent axis through the shared lobby, the circulation was tightly integrated with the media, experience and recreational functions that formed a three-dimensional corridor which organically formed a comprehensive and dynamic axis. The library is thus no longer a brutal volume in the inherent perception.

In regards to the programme, a book-related multi-functional programme was introduced to the ground and first level, in hopes for a vibrant public space that’s not merely for reading. The first level seamlessly connects to the outdoor plaza and the landscape, the ambiguous boundary between the interior and exterior further highlights its public purpose. Above the second level are spaces for information, reading and immersive learning, in contrast to the vibrant lower levels. The hill of the books and the roof terrace provide a richer spatial experience as well as an alternative choice for the reading activities.

The project has evoked a contemplation on how a public building exists in the public view:  the space and detail once again become the method, not just serving for the basic function but to provide an atmospheric scene within which the visitors can choose the purpose of use. It will be a place of freedom with enough tolerance on multi-purpose utility, it will also be a public era returned to the city.