Architecture has always centered on permanence and ephemerality. Defined by material conditions, how we build is closely tied to what we preserve and how we conceptualize the future. Furthering international cooperation in education, the arts, the sciences, and culture, UNESCO is an organization that continues to examine the relationship between history and growth, preservation and change. As architecture, landscapes and cities become threatened by the climate crisis and unrest, cultural context becomes paramount. 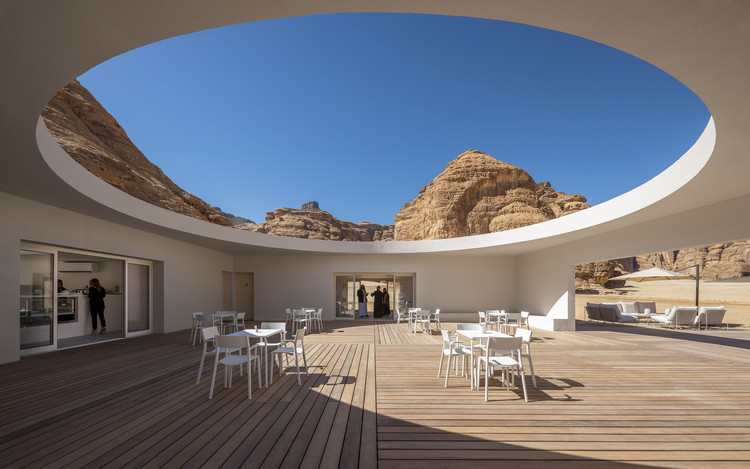 UNESCO is the United Nations Educational, Scientific and Cultural Organization. It seeks to build peace through international cooperation in Education, the Sciences and Culture, and their programs contribute to the achievement of the Sustainable Development Goals defined in Agenda 2030, adopted by the UN General Assembly in 2015. As they state, “Peace must be founded upon dialogue and mutual understanding. Peace must be built upon the intellectual and moral solidarity of humanity.” A World Heritage Site is a landmark or area with legal protection by an international convention administered by the UNESCO. World Heritage Sites are designated for having cultural, historical, scientific or other form of significance. The following series of projects were built on or near UNESCO World Heritage Sites, each exploring what it means to advance awareness and understanding.

Persepolis Entrance Pavilion is a 200 sqm open-space, multi-functional pavilion located at the entrance of Iran’s renown UNESCO World Heritage Site, The Persepolis. The form finding process is guided by an indirect modelling algorithm dealing with axial lines of the space at its core, developed by our team which indirectly guides form finding and geometry. Through this strategy, “Medial Surfaces” are derived by controlling axial lines which eliminates direct control over the surface’s geometry.

This project is located at the ridgeline of the North Antrim coast at the gateway to the UNESCO World Heritage Site. The proposal for the new visitor facilities can be understood as two folds into the landscape. One folds upwards revealing the building and the second folds down to form the carpark and shield it from view of the approach road and coastal path. Between the two folds, a ramp leads to the coastal ridgeline which is restored at this location.

The site contains ruins that form part of the UNESCO Pearling Path. The entire building functions as the entrance to the cultural heritage and the foyer for the medina. It is an urban room for the people of Muharraq with the scale of a public park. Concrete elements are placed along the property boundary to form a new locus in the dense city. A large space is created in which a forest of columns and wind towers hold a horizontal plate 10 meters above ground.

Kinderijk is the prime example of a Dutch windmill landscape. In 1997, the landscape’s ensemble of mills and pumping stations was declared a Unesco World Heritage Site. The new Visitor Center is positioned half on water and land restoring the long visual line running along the quay. The Visitor Center’s design unbundles the different visitor flows and its subtle architectural language restores the landscape’s identity.

The new Blaye Tourist Office faces the Vauban Citadel, a UNESCO World Heritage Site. The use of local stone was an obvious choice for the architects, who wanted an architecture that would dialogue with the history of its region thanks to material and the knowledge of its use. The project fits with finesse and conviction into a rich heritage context, without making any concessions to its contemporary design.

“Lorsch Abbey” in Southern Hesse was listed as a World Heritage Site in 1991. The first monastery on the site was the Altenmünster which dates from the reign of Pippin the Short. As the monastery gained spiritual and economic influence an abbey was built nearby on a huge glacial dune. The complex became an important centre for restoring the cultural memory/inheritance of antiquity.

The archeological site of Troy has been inscribed as a UNESCO World Heritage Site in 1998 because of its outstanding universal value as a site that has witnessed various civilizations for over 4000 years and has been a significant influence on the development of the European civilization, arts, and literature over two millennia. Museum of Troy, located 800 meters from the site, is honoring this heritage and is a medium to tell the rich history of Troy in relation to its natural, cultural, artistic and archeological context.

Closed since 1962, the salt works in Salins-les-Bain have been an important productive site since the middle ages right in the centre of the French city in the Franche Comté. When the competition for restoration of the salt works was announced in 2006, the city authorities had already set the goal of transforming it into a monument to the history of local production. Made a UNESCO World Heritage Site, the site is intended not so much as a museum of salt but an open-air museum of local history.

Some of the most prevalent structures found everywhere around Al Ula are walled date plantations, usually rectangular in shape with large, centrally aligned gates. With palm tree crowns peaking above the sand coloured walls, we can imagine the refreshing shade within, a place where one could rest from the surrounding arid desert. Not far from Al Ula is Hegra, Saudi Arabia’s first UNESCO World Heritage Site for its rock-cut monumental tombs. The Visitor Centre is a simple square building, carefully isolated at the entrance of the Hidden Canyon welcoming visitors for the first Desert X Al Ula exhibition.